Way back in 1965, Bob Dylan went electric, which upset some of his fans so much that they booed him at the Newport Folk Festival.

I’ve wanted to re-create some of my cats digitally for ages, so I can put them on button badges and other things. Recently I was able to invest in a professional badge making machine after a run of sales of my drawings (thank you!) so I sat down at the computer, opened Adobe Illustrator, and started playing.

I started with a design based on a stupidcat original that was bought by a chap in America – he’s been nicknamed Sir Reginald (the cat, not the chap) and here’s the very first badge I made on my shiny new press:

The next cat to get the Illustrator treatment was my sad black one – here’s an early badge test of the two of them:

I began to think about packaging – most badges tend to be put in plastic bags with a folded card stapled on the top. I wanted to do something a little different. Here are a few things I tried: 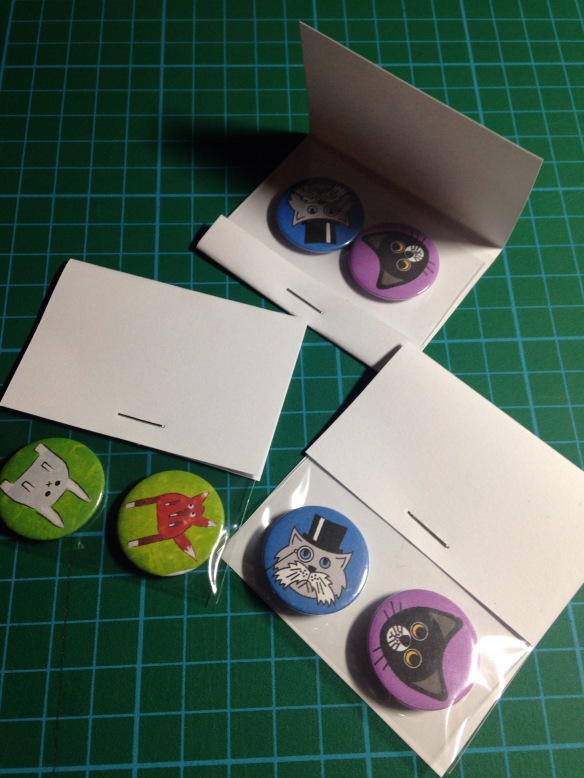 I loved the idea of the matchbook-style packaging…

…but it was a bit too slow and fiddly to make, and the visible staple irritated me a bit. Around this time I started referring to them as “badgebooks” and then had a thought – I was already planning on making stupidcats notebooks, so why not just make a simple, folded book-cover type thing with the badges inside?

Here are some prototypes, with mock-ups of the notebooks:

The added bonus of giving the badge packaging a bookish theme meant I could give each set of designs a “volume” number. I’d now added two more designs based on old drawings – the alien, and the other stupidcat, inspired by Neil Gaiman‘s book “Coraline“.

I still had a problem though – I didn’t want to use a plastic bag in the packaging, and cutting little flaps or punching holes was fiddly, time-consuming, and looked messy on the back. So how could I attach the badges to the card?

Then I received a new bank card in the post.

So I looked up “glue that sticks bank cards onto paper” (or words to that effect) on the internet, and my little problem was soon solved! I posted a set of badges to myself, and was relieved to find that despite travelling through the postal system, the badges were still attached to the card when I received them. Success!

After much research I’d settled on a range of card from GF Smith called Colorplan to use for my notebook covers and badgebooks, and I matched the colours used on the artwork as closely as I could to the card, then went to visit my friendly local printer (the same one that does my Giclée prints) and he printed out the badge artwork on his posh laser printer. You can really see the difference between my fuzzy inkjet prints and the vibrant, crisp laser prints (the top row):

Here are the badges against some of the cardstock – not a bad match at all! 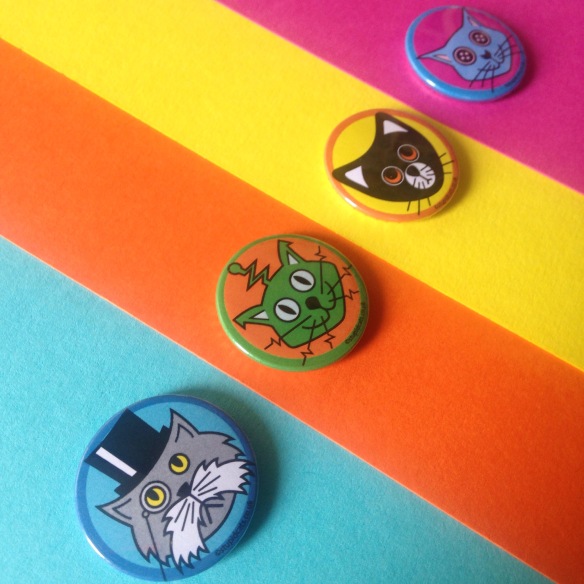 Once I’d finalised the design for the badgebook covers, I had a rubber stamp specially made, and also one for the back with my logo and website address that I’ll be using on my notebooks too: 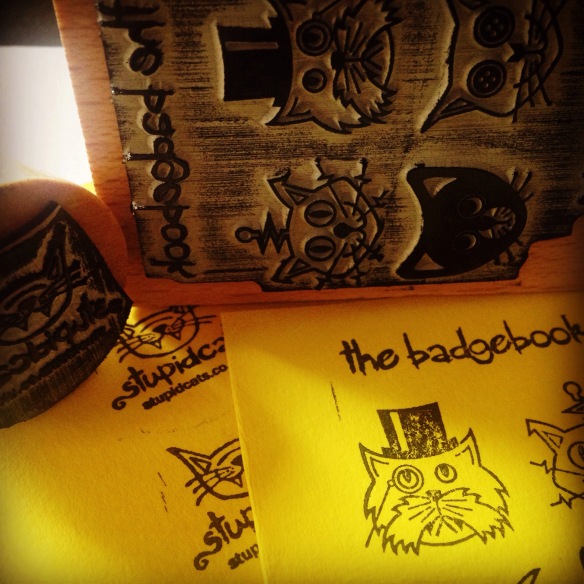 And here’s the finished badgebook! I asked Twitter, Facebook and Instagram for help choosing the colour for volume one and blue won, so I promptly chose orange which came in second place! 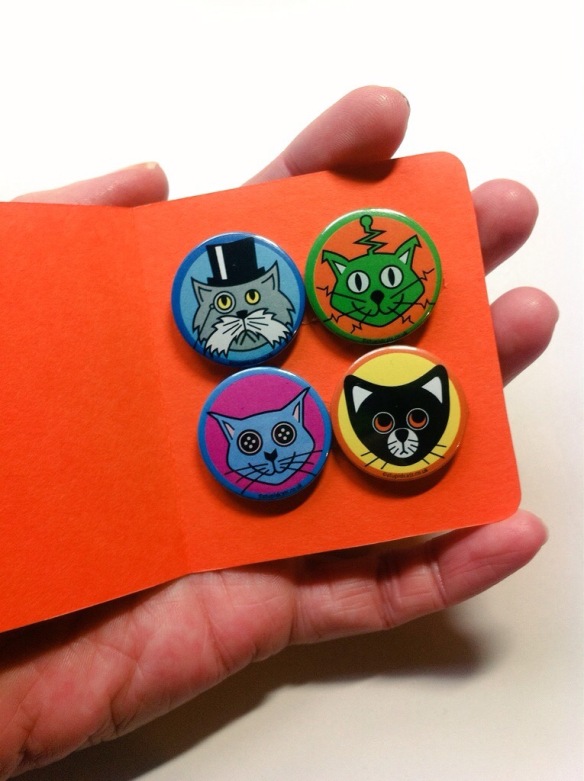 The final touch was making teeny brown paper bags that just fit a badgebook and a business card:

So there they are! I already have four new designs in progress for volume two – but before I release that, I’ll be launching my notebooks – here’s a preview of the first one, which explains why I didn’t go with blue for volume one of the badgebook. As you can see, I’ve dropped the text on the cover that I had on earlier mock-ups to draw more attention to the cutout and the thinner, contrasting card of the inner cover. They’ll be handstiched, using thread that is colour-matched to the inner cover.

Volume one of my badgebook is available now from my Etsy store, and if all goes well my notebooks should be ready to go on sale in a couple of weeks time.

Thanks for reading, and I hope you haven’t booed me! 😸

ps – I still love the matchbook idea, so will probably use it for one-offs or something later!

Click here to visit the stupidcats online shop on Etsy...